CC To the Right Places 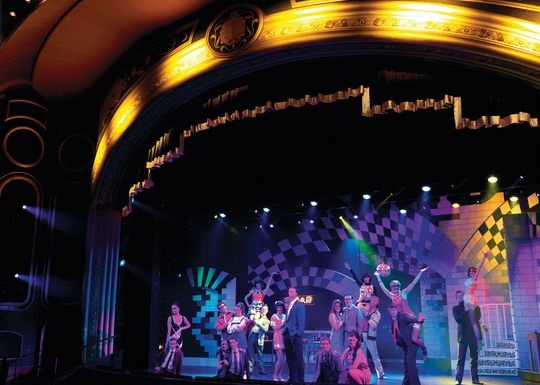 Ugliness/ CC To all Youth and all Presenters for further Use.

Please, let the German-language writing be translated quite exactly in all languages worldwide.

Today, on Whit  Monday, I do not want to miss to deliver a heavy blow to the account.

Yesterday, on Whitsun saw briefly over the TV most likely a live broadcast, in which a well-known teenager rocked up various girls and brought them to almost an ecstasy.

Some girls shrieked, another held her mouth in shock at her feelings, still others almost had tears in their eyes.

The teenager was talking to a female presenter, about in her late twenties, who wanted confirmation about her outfit from a boy to start a good transition for the presentation of a fashion show of two girls, apparently chosen from the audience.

As the girls slowly calmed down, some of them unable to control themselves as they also high-fived each other, the camera also kept rolling.

These and similar pictures clearly show what should happen to the values of young people, because such a described girl will be so easy to stop and hold, if the psyche in this form is more often pushed to the extreme.

What were you as the organizer and you as the spectator actually thinking about that?

It has become a lucrative business through the application by means of controlling the psyche, because young people have enough pocket money or apprenticeship money for these and other concerts and events and will spend it on them.

The next question about parents and their attitude towards this permission and approval of such event attendance comes up.

According to the Empress, most parents lack the overview that lies between the danger and the legitimized form of society.

In addition, these described girls will not listen to reason and such kind of concert visits are aimed.

This public screeching of the girls, which also lays bare a status of the girls in question, can be extremely repulsive and frightening for many boys.

This shrieking of the girls, which is lured out over the amplifier with the sound mixture, has a dangerous background, but also health consequences of the young girls are not to be excluded and they can end, even if it applies only to few, in case of emergency one day in a psychiatry.

What is expressed by a girl in this stage, further clarifies itself with the women and mothers, also by the shrieking laughter, what also men cannot cope so easily and could feel thereby rather attracted to the same sex, since from there more understanding and straightness as well as apparently an internal cleanliness comes.

This shrieking of women can be recognized by an intelligent person as a clear primal scream, in that shrieking women unconsciously recognize that danger is imminent, since the future is reflected from all sides in different ways.

If a child is about to run in front of a car, the mother's cry of warning is different than when a child does something wrong.

This screaming, cackling and this shrieking of the women says clearly that for these women a "protected nest" does not exist any more, because this protection seems to have been lost by many incidents and these women have partly built up a self-protection.

The self-protection of a woman can become a doom for others, depending on the distinct genes a woman possesses.

The more clearly a woman can shriek, the more pronounced is her need for protection and the more such a woman is fixated on "having children" and keeping house combined with the desire for male strength.

Therefore, these girls and women do not necessarily have to be dumber or more primitive, but often have a more pronounced maternal instinct than other women who may be different in temperament.

So just the girls and women run the risk through such performances not to get to their counter pole to be able to find their fulfillment in life, because the male strength can not cope with this listed behavior.

For this reason, you and others will please see to it that this kind of public appearance is stopped in the future.

The reversal of the sexes and the mixing with the animal, which can be brought up hard by certain women, is at stake.

Also this hardness of those women says something about the primal fear of a woman and mother clearly, because also women love a superior order and cleanliness, for which normally a man has to provide.

Whoever can screech most clearly also has the most pronounced maternal instinct, so that even the Empress screeched into the telephone years ago, which actually embarrasses her.

Since however much, which should have destroyed the young people, like the presented gossip about the cell phone and telephone will come to light, the adults will have to place themselves please in front of the youth, in order to deliver protection in this regard.

In return, I ask the youth to gossip and babble about the cell phone of completely imaginary people who do not exist, but preferably in such a way that so-called adults overhear this babble, in order to make these people aware of what they have allowed to happen to future generations.

I wish that the gossiping about others stops, so that also the screeching, which will come via the Aether, can stop.

Also the Empress can't allow herself too much concerning the screeching, because she also wants to please a man, however one man is already enough for the Empress!

Unfortunately, the same is true only for a few girls and teenagers, so these girls and women will probably not find a man in the end.

So the Empress hopes today on Whit Monday that everybody understands the language which the Empress and her "Better half" speak, it is also the "Beating language"!

With kind regards and

Also the deafening noise from the amplifier, whether in the car or in the discotheque will attack the health; not to mention the alcoholic mixed drinks or "the stuff from which the dreams came".